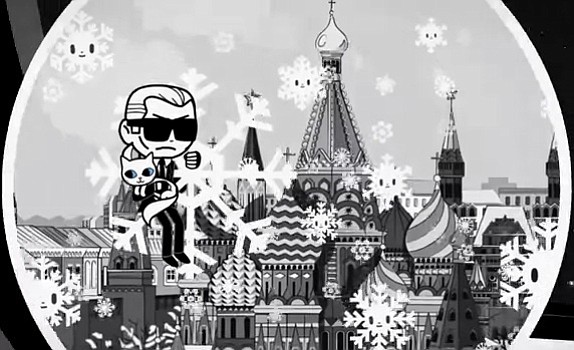 The animated adventures of Karl Lagerfeld and his cat Choupette.

Mr. Choupette joined two other Lagerfeld figurines: Mr. Jeans and Mr. Black. But, as Tokidoki points out, this is Choupette’s first appearance immortalized in plastic.

Accompanying the announcement was this statement from Lagerfeld: “I am very flattered that I have become a ‘Tokidoki.’ I have always loved them and I am very happy to be one of them.”

The figurine is limited-edition and available for $200 at the Tokidoki boutique in Los Angeles—and on the company’s website beginning July 12. The Tokidoki x Karl Lagerfeld collection will be sold exclusively by Net-a-Porter beginning July 3.

And there’s more. To celebrate the launch, Tokidoki designer Simone Legno and Loris Lai created an animation strip featuring “the adventures of Karl Lagerfeld and his cat Choupette.”

I know what you’re thinking: Man in suit holding a cat? James Bond (or Austin Powers) villain. But check out the real thing in this Harpers Bazaar profile. and you’ll realize it’s only a passing resemblance. Besides, this is Karl Lagerfeld. Once the animated series starts, the arm cat could become the new purse chihuahua. 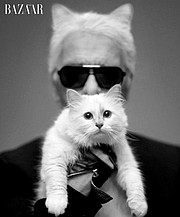