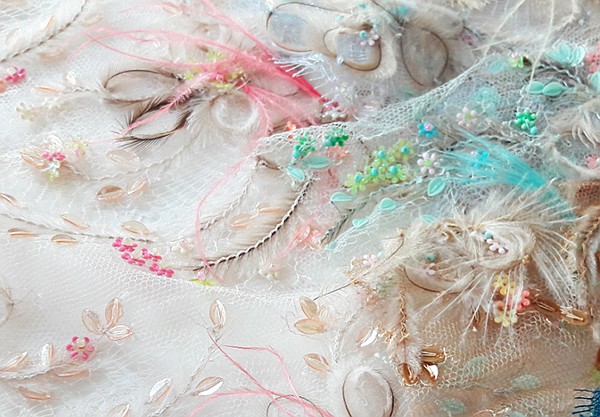 Solstiss brings its legacy of over 150 years in lace making back to Los Angeles to service the significant California market. | Photo courtesy of Solstiss

Based in Caudry, France, with factories dating back to 1876, Solstiss is the world’s leader in French-lace creation and manufacturing, and now the company is returning to the L.A. sunshine, further proving how perfectly fitting its name is.

Located at 777 Alameda St. in ROW DTLA, the new L.A. showroom is managed by Maria Cervantes. Solstiss first entered the U.S. market in 1986 and first opened an L.A. showroom in 2000, which showcased over 3,000 designs.

“With this new opening, Solstiss will bring its proud heritage and quality, creativity and unique craftsmanship of French lace to an even wider audience,” said Francois Damide, president of Solstiss USA. “We’re excited to have Maria Cervantes on board as California account executive as her knowledge of lace making is a big plus for us.

“The California market has always been a significant one for Solstiss,” Damide continued, “as our company has been supplying the best designers for more than 20 years and have been featured in top movies like ‘Titanic’ and ‘The Great Gatsby.’”

Solstiss’s lace-making expertise has been passed down directly across generations, the company boasts, without ever leaving its ateliers, and it is considered to employ the most highly skilled lace makers in the world. It is renowned for the wide range of its designs and its extensive color palette. It has also managed to blend cutting-edge innovations with traditional techniques, and its laces are made entirely on Leavers machines.

Solstiss employs over 250 people and operates 110 machines, or 30 percent of the Leavers looms that remain in the world, some of which can weigh up to 10 tons. Its creations are intended not only for luxury women’s fashion but also lingerie, home décor and even face masks.