Blending her love of fashion with a lineage of garment making, Kristen d’Offay set out on a new career when she began development of her <strong>d’Offay</strong> line two years ago. On June 15, d’Offay will launch as a luxury women’s brand created using dead-stock textiles that provide the foundation for more-responsible fashion. 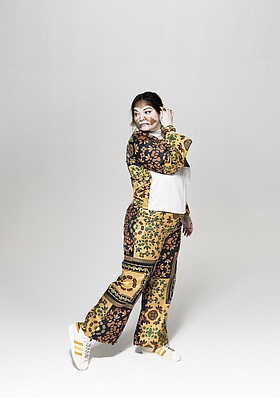 After working with brands such as Cult Gaia, Flynn Skye, Genetic Los Angeles and A.L.C., Los Angeles designer Jiyeon Lee is creating her own designs for Shein X, the fast-fashion e-tailer’s program that supports emerging artists.

OC Fashion Week produced its 24th season on March 22 with a group of designers who displayed Spring 2021 styles at The Ritz Carlton Laguna Niguel, which overlooks the Pacific Ocean.

The beginning of April ushers in the start of Earth Month and, to celebrate, The RealReal announced a partnership with eight luxury brands to present the inaugural release of pieces from its new ReCollection upcycling program.

As fashion continues to trend toward the 1990s, Levi Strauss & Co. envisioned a new approach to its Levi’s Red collection, which was released late in the decade, as it relied on silhouettes similar to the original with modern sustainable fabrications.

Jessica McClintock, Owner of the Eponymous Label of Formalwear

Fashion designer Jessica McClintock passed away on Feb. 16, according to a notice that was published March 12 in the SFGate.

During Women’s History Month this March, Magnus Alpha co-founder and Creative Director Hommy Diaz wanted to release a special piece to honor the female caregivers who accept the lifelong task of raising a child. The result was a limited-edition Doily Hoodie that is designed, cut and sewn in Los Angeles.

Cozy knits in flattering yet comfortable silhouettes complemented by rich textures and lighter autumn hues, afford a fashion-forward approach to relaxed garments for Fall 2021, according to trend-forecasting expert Melissa Moylan of Fashion Snoops.

An Open Letter From the Publisher

An Open Letter From the Publisher

Learning From 2020 to Rebuild Into a Resilient, Diverse, Supportive Fashion Industry

Looking back on the past year generates feelings of reckoning, fortitude, accountability, forward thinking and survival. In early 2020, the fashion business immediately shifted course to create personal protective equipment for those on the front lines of the COVID-19 pandemic as well as for the public.

Looking back on his 16 years in business, Blayne Siegel, president and founder of Kinetix Casual Luxury, is grateful for his long journey to veteran status in the space of creating luxurious T-shirts and other relaxed styles.

In lieu of a New York Fashion Week presentation, Kevan Hall told the story of an optimistic future surrounding his latest collection as he directed a film titled “Together Again,” which premiered Feb. 16 on the Council of Fashion Designers of America’s Runway360 platform.

Social-media influencers have captured the imaginations of many consumers by acting as the ambassadors for brands and fashion lines on Instagram and YouTube. A handful of these influencers also are taking the leap into designing their own fashions.

Generating Self-Pride and Cultural Respect the Goal for Kin

Proud to be Kin

Meeting during their time as students at the University of Southern California, Kameni Ngahdeu and Kwabena Osei-Larbi were mission driven from the start of their friendship and found comfort in their shared cultural backgrounds.

Fashion brands and retailers are observing Black History Month during February with special capsule collections and support for African-American designers and creatives.